“Here we have a burgeoning (mangrove) leaf. You take it and you plant the lower third in the mud, and then you take 2 steps—one, two, and then you plant another one,” said the retired politician, with a smile ear to ear, as he wades in the murky coastal waters of Senegal’s Casamance Delta.

Planting since 2009, Haidar el Ali’s efforts have produced one of the most stunning successes in the history of modern large-scale reforestation—the restoration of an entire Senegalese mangrove swamp.

Forests are one of the most resilient habitats on our planet while also being one of the most exploited. Ever since the scientific community began to encourage the planting of trees to ‘re-wild’ previously lost forest ecosystems to respond to climate change, some very determined members of the human race have rolled up their sleeves and produced remarkable results.

As Senegal’s former Minister of Ecology (and later Fisheries), the 67-year-old was able to rally citizens from the local coastal population to help him plant 152 million mangrove buds by hand, and it created a truly beautiful coastal mangrove forest stretching hundreds of square miles—one of the largest of its kind in the world.

A Paradise for Crabs—and Environmental Ministers

Recently, Jean Francois Bastin et al. estimated that 2.4 billion acres of additional forest cover on the earth (1B hectares) would suck 25% of all the carbon currently being pumped into the atmosphere. Science like this was in large part responsible for the World Economic Forum’s launch of the Trillion Trees vision.

Because they store immense amounts of carbon in their submerged root systems, mangroves and other bodies of coastal vegetation are some of our planet’s most important ecosystems. They help filter river mud runoff from entering the sea, while absorbing the brunt of tidal waves and tsunamis. And they also provide some of the most valuable habitat for near-shore wildlife including birds, insects, invertebrates, crustaceans, reptiles, fish, and even monkeys.

MORE: First Drone Project of Its Kind in Canada is Aiming to Plant 1 Billion Trees by 2028

In a video interview with BBC, Haidar described how the original mangrove forest in Southern Senegal was disrupted in the 80s and 90s as the nation began to build roads which diverted or ended the flow of rivers. “At the time there were no environmental impact studies, of course.” 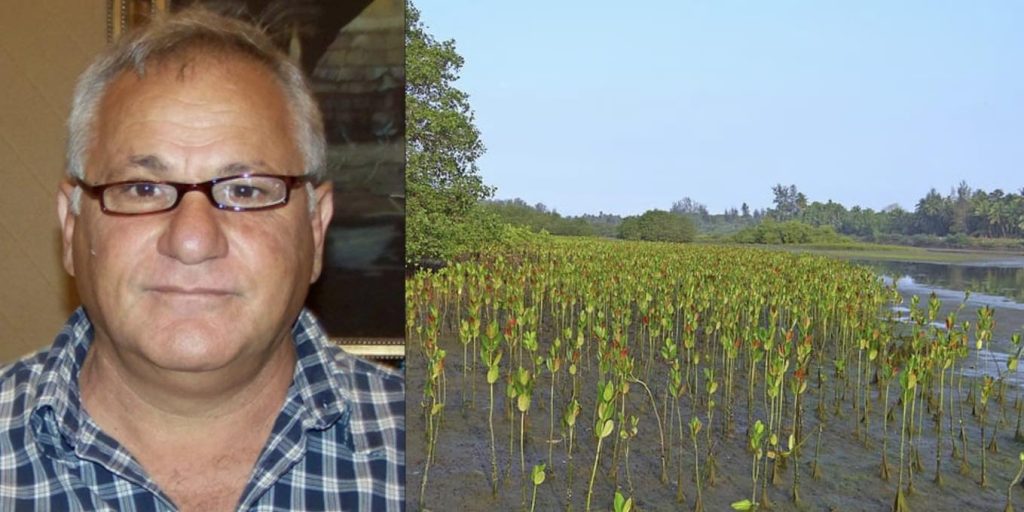 Next came the lumbermen who clear-cut the coastal mangroves. It wasn’t, as Haidar explains, until the salt from the sea water entering the delta poisoned the nearby rice fields that people began to think about replacing what had been lost.

WATCH: Man Succeeds Where Government Fails—He Planted a Forest in the Middle of a Cold Desert

Though nearing his seventh decade of life, Haidar swims butterfly stroke through the water-borne forest of his and his colleagues’ making, pointing out the presence of returning wildlife as a boon to the local economy.

“The mangrove is a fantastic ecosystem that attracts rain—and it is well known scientifically that this mud captures methane, and that these leaves capture CO2,” he explains.

“I take a lot of satisfaction from this. I’m ready to do it every day, all evening, all my life.”

(WATCH the heartwarming BBC video below… [NOTE: BBC only has video, no full article)

Plant Some Positivity! SHARE This Amazing Story With Friends On Social Media… 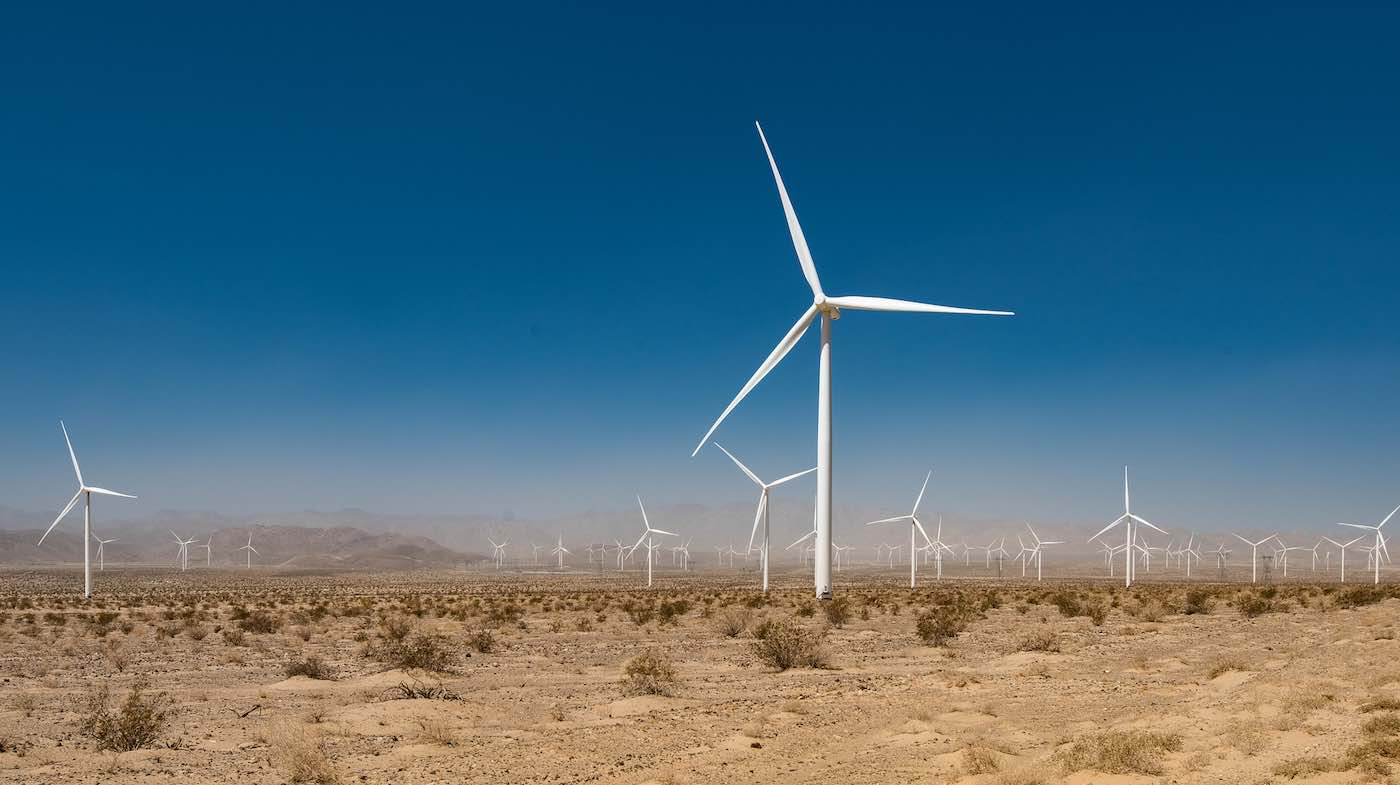 Senegal is preparing to take a large step in the emerging market of African renewable energy with the construction of the 340 million euro Taliba N’diaye Wind Farm.

Almost all of the 46 wind turbines planned for the site have been completed, with the first trickle of totally renewable energy finally flowing into the capital city of Dakar.

“This is an exciting time and it brings us a step closer to our ultimate goal of providing power for millions of Senegalese”.

Located 100 kilometers (60 miles) north of Dakar, the turbines and substations erected so far are already generating 50 megawatts of the proposed total of 158 to be added to the grid when Taliba N’Diaye is finished.

This will serve to increase the power supply of Senegal by 15% as well as save 300,000 tons of carbon from entering the atmosphere annually.

Africa Happenings reports that the lack of reliable access to electricity is a major contributor to unemployment and low manufacturing output, as power shortages often stall heavy machinery, making investments into capital goods such as electric forklifts or other construction equipment risky.

They estimate that 500 million Africans don’t have reliable access to electricity. For instance, Nigeria, another West African country, could be losing as much as 5% GDP per year due to power shortages. People resort to portable backup generators, which often run on dirty diesel fuel, contributing mightily to falling air quality due to the fumes.

MORE: Scientists Use Recycled Sewage Water to Grow 500-Acre Forest in the Middle of Egyptian Desert

With recent successes in Senegal, Lekela Power has also recently secured financial investments worth $325 million for its 250 megawatt West Bakr Wind project in Egypt. Expected to be fully operational by 2021, West Bakr will produce over 1,000 gigawatts per hour, per year, of clean energy for the Egyptian grid.

Egypt’s ‘Build, Own, Operate’ plan is an ambitious project aimed at establishing an Egyptian-managed energy infrastructure that will be made up of 20% renewables by 2022.

The Suez Gulf is a high-traffic area for migrating birds, sometimes at risk from the windmill blades. Lekela and Egyptian Electricity Transmission Company have planned the West Bakr project to be more bird-friendly through the development of a “shut down on demand” program.

Lekela has partnered with the Egyptian Environmental Affairs Agency and its Migratory Soaring Birds project to help fund and eventually implement a Migratory Birds Monitoring training program that will help ensure birds survive the journey around their wind farms.

West Bakr near the Gulf of Suez Canal is far larger than Taliba N’diaye, and its massive energy output is expected to offset more than 550,000 tons of carbon dioxide emissions annually.