Those who consider using castor oil to induce labor should try to find out about its effectiveness, particularly the safety issues associated with its use for this purpose, before they try it. This is because there are significant dangers.

Keep reading for more information on the risks and dangers of using castor oil to induce labor, whether or not inducing labor is a good idea, and some other ways that may help those who wish to do so.

Share on PinterestDehydration, diarrhea, and cramping in the stomach area are some possible side effects of taking castor oil.

Castor oil is an extract from Ricinus communis. R. communis is native to southern Asia.

For centuries, people have used castor oil for various ailments, though most applications only have the support of anecdotal evidence. Few scientific studies have addressed the effectiveness of castor oil in treating health conditions.

Castor oil is a common ingredient in soaps, coatings, lubricants, and other commercial products. It contains several allergenic proteins, including ricin, which research indicates is a potent and dangerous plant toxin.

However, following the removal of these potentially dangerous substances, people can use castor oil for pharmaceutical purposes. For example, castor oil can help with constipation. Learn more about castor oil and constipation here.

Castor oil also has potential benefits for the face and skin. Read about them here.

According to the University of Texas Southwestern Medical Center, castor oil will likely cause uterine contractions and irritation. Although these may appear to be labor contractions, they are more likely the result of digestive distress than actual labor.

In fact, they go on to say that women who take oral castor oil are no more likely to go into labor than those who do not.

However, one recent study found that there is a connection between taking castor oil and inducing labor. The study concluded that castor oil may induce labor within 24 hours if a woman is 40 weeks pregnant.

Researchers conducted the study using women in their 40th and 41st weeks of pregnancy, over a period of 5 years.

However, one 2009 study found no connection between taking castor oil and inducing labor. This study included over 600 participants in week 40 or above of their pregnancy. The study concluded that castor oil had no effect on the time of birth. It also did not seem to have any harmful effects.

A 2018 study found that castor oil induction is more effective in women who have had babies previously. The researchers reported no adverse effects from their sample of 81 pregnant women.

Another 2018 study looked back on women who had used castor oil (while 40–41 weeks pregnant) under the care of their doctor, and they found it to be effective in inducing labor within 24 hours for most of the women.

Though study results are mixed in terms of castor oil’s labor-inducing abilities, none of these studies examined issues of safety for either the mother or the fetus.

In previous studies, researchers have not come across any known risks to the fetus.

However, the mother may experience side effects from ingesting castor oil. Some potential side effects could include:

Women with sensitive stomachs or other gastrointestinal conditions should avoid taking castor oil. Also, those who have had a cesarean delivery in the past should never attempt castor oil ingestion while pregnant. Learn why below.

In most cases, the body will induce labor when it is ready to give birth. Some women may go into preterm labor, while others may go into labor later than their expected due date.

Importantly, women who have had a cesarean delivery should never attempt to induce labor. This is because it can cause uterine rupture.

The American College of Obstetricians and Gynecologists and the Society for Maternal Fetal Medicine describe the journey to full term in the following ways:

If a woman is at full term or beyond and yet to give birth, a healthcare professional will likely consider inducing labor or possibly scheduling a cesarean delivery.

Some other reasons a doctor may choose to induce labor include:

There are no proven ways to induce labor at home. A doctor or healthcare provider can induce labor in a hospital or other clinical setting.

That said, there are some other methods to induce labor that may be effective. These include:

It is important to note that none of these methods are scientifically proven, however.

Anyone concerned about going into labor should speak with a doctor or healthcare provider before attempting any methods themselves.

People should avoid using castor oil to try to induce labor, as there is no scientific evidence to prove its effectiveness for this purpose. It is much safer to work with a doctor if it is time to induce labor. Inducing labor before 40 weeks poses a risk to the fetus.

No studies have found any direct risks or dangers for the fetus in using castor oil, but in the mother, it can cause diarrhea, false contractions, dehydration, and other stomach-related side effects.

People who want to induce labor should speak with a doctor about their concerns.

There are no proven home methods for inducing labor, but a doctor or healthcare provider can help to induce labor in a clinical setting if there is a need for it. 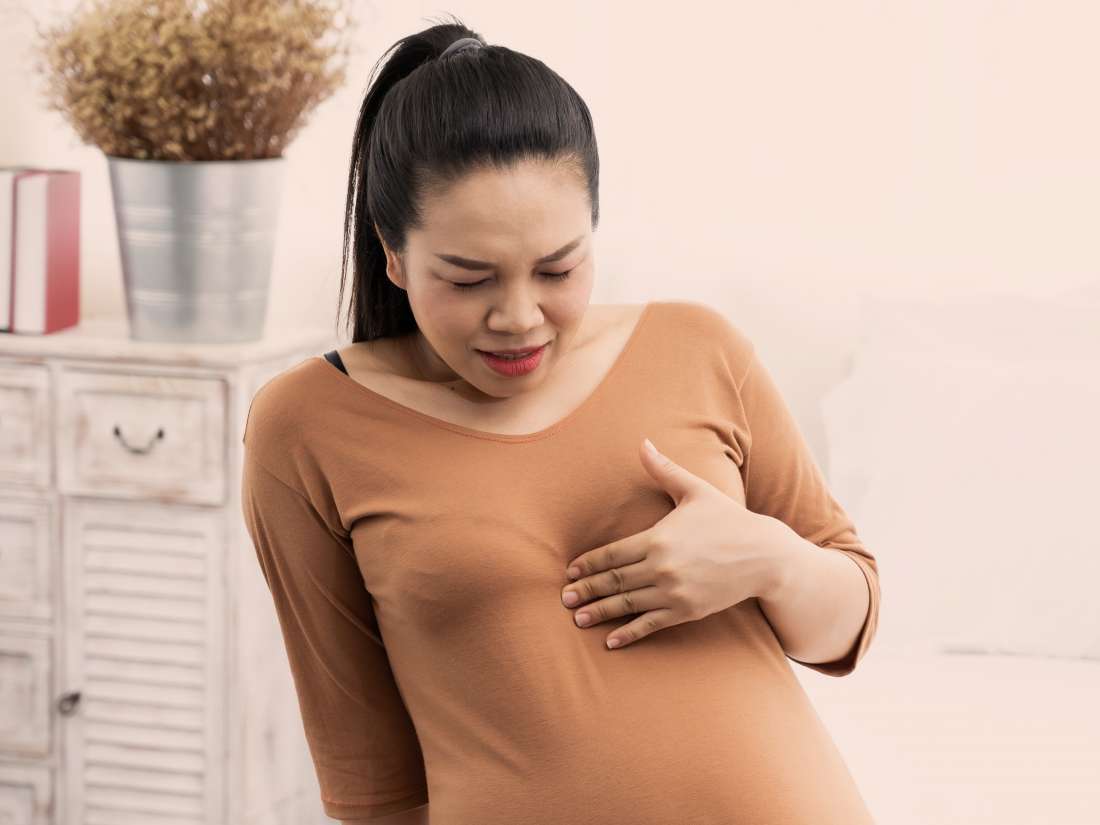 Pregnancy can cause discomfort and pain in many parts of the body. When these sensations occur in the chest, the cause is often pressure from the growing fetus, acid reflux, or other relatively harmless issues.

In rare cases, this chest pain can result from cardiovascular issues or complications of pregnancy.

Keep reading for more information about the causes of chest pain during pregnancy and when to see a doctor.

Many women experience pain or discomfort during pregnancy, and some of these sensations can mirror symptoms of cardiac conditions. These issues include:

These can be worrying, but often, they do not result from a serious health problem.

Some relatively harmless issues that can cause chest pain during pregnancy are outlined below.

When a person eats, a valve between the esophagus and stomach opens to let food into the stomach. This valve is called the esophageal sphincter.

When a person is not eating, the esophageal sphincter ordinarily closes to stop partially digested food and stomach acid from rising back up into the esophagus. If this does occur, the issue is called acid reflux.

During pregnancy, rising levels of the hormone progesterone cause the esophageal sphincter to relax, increasing the risk of acid reflux.

Acid reflux can cause heartburn, a burning sensation in the throat or mouth that is common after eating, particularly when the person is lying down after a meal.

A doctor or pharmacist may recommend taking an antacid for persistent heartburn during pregnancy. This type of medication neutralizes stomach acid, relieving the pain.

As the fetus and uterus grow, this increases pressure on surrounding organs, including the lungs and stomach.

This pressure can cause discomfort and pain in the chest, typically during the second and third trimesters. Increasing pressure in the chest cavity can also cause:

A pregnant woman who experiences the symptoms above should see a doctor to make sure of the cause.

The cause of chest pain during pregnancy may be a severe health issue, such as preeclampsia, a heart attack, or another heart condition.

Chest and shoulder pain during pregnancy can indicate a serious complication called preeclampsia. This can sometimes be fatal for the mother and fetus.

Common signs and symptoms of preeclampsia include:

Preeclampsia typically goes away once the baby is born. However, in some women, preeclampsia continues after pregnancy or begins after they have given birth.

Women with preeclampsia may also experience related complications, such as eclampsia or a syndrome that involves rupturing of red blood cells, a low platelet count, and elevated liver enzymes — commonly called HELLP syndrome.

A woman may not know that she has preeclampsia or related complications. Regular health checks and tests help doctors identify these issues.

A relatively uncommon cause of chest pain during pregnancy is a heart attack.

During pregnancy the volume of blood in the body increases to accommodate the growing fetus. In order to pump the extra blood efficiently, the woman’s heart rate increases, and this added strain leads to a higher risk of a heart attack.

A 2018 study investigated the incidence of heart attacks among women in the United States who stayed in the hospital for complications of pregnancy or the adjustment period afterward. Heart attacks had occurred in 8.1 out of every 100,000 of these women.

Women who have heart disease or other preexisting cardiac conditions have an increased risk of a heart attack during pregnancy.

A pregnant woman who experiences any of the above symptoms should see a doctor immediately.

In many cases, chest pain and discomfort result from relatively harmless issues. However, a woman should see a doctor if she has any concerns about her health or that of the fetus.

It is important to attend every appointment with a doctor or midwife and to undergo every recommended test. These can indicate whether any complications have developed and ensure that the mother and baby are healthy.

Women who experience any symptoms of heart disease or preeclampsia during or after pregnancy should receive immediate medical care.

It is also crucial that pregnant women are aware of the symptoms of a heart attack. According to the American Heart Association (AHA), these include:

A pregnant woman who experiences any of these symptoms and believes that the cause may be a heart attack should call 911 immediately or otherwise seek urgent medical assistance.

Chest pain can be a harmless symptom of pregnancy. The cause is often heartburn or pressure as the growing uterus pushes against the organs in the chest cavity.

However, chest pain during pregnancy can indicate a more serious condition, such as a heart attack or preeclampsia. These require immediate medical attention.

Pregnancy can be a physically challenging time. Anyone with any concerns about their health or that of the baby should consult a doctor.