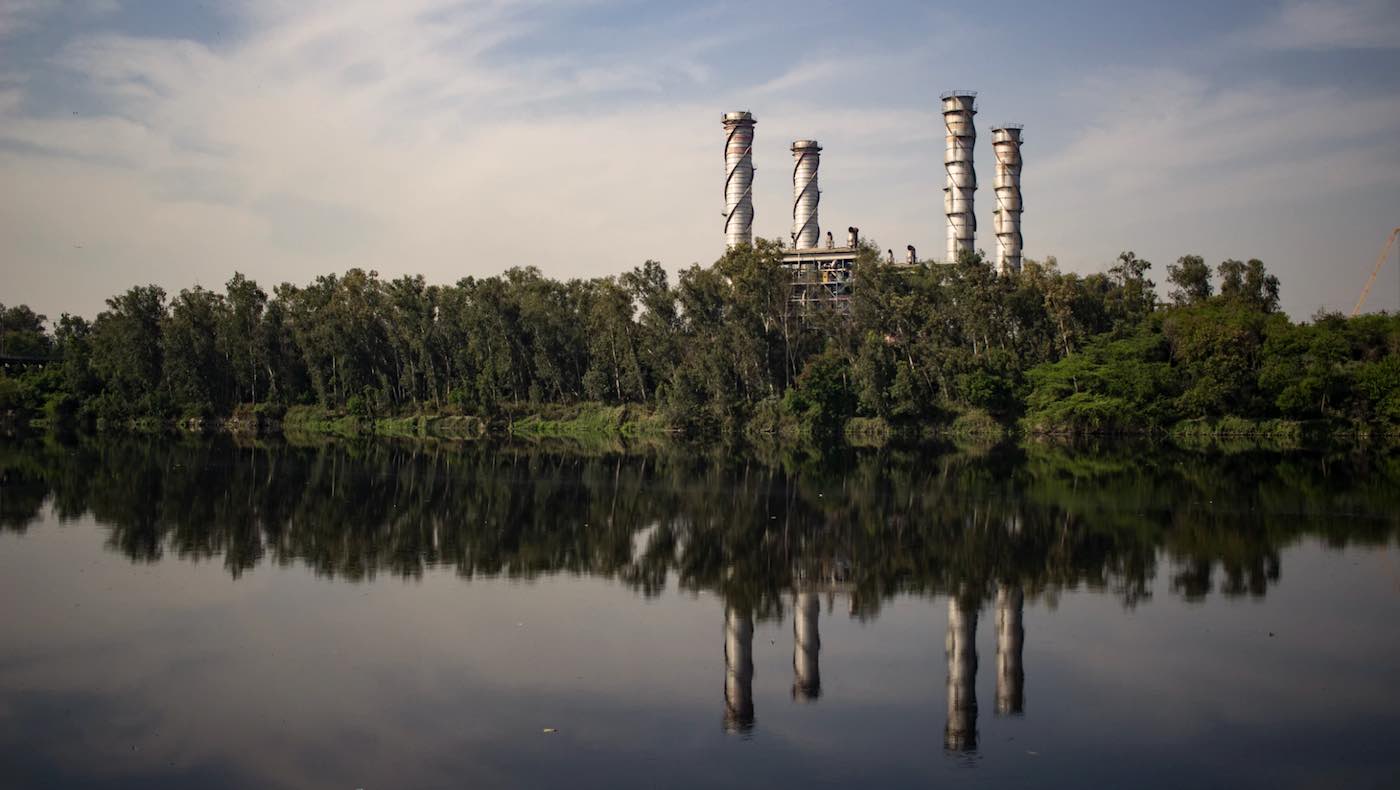 With a population of 1.2 billion people, any news of renewable energy success in India is a cause for celebration. One would undoubtedly expect to see decreasing carbon emissions due to widespread travel reductions due to COVID-19 prevention measures, but a further analysis shows us that coronavirus doesn’t get to take all the credit, and the unholy trinity of oil, coal and gas seems to be on the downward slide.

In a report from carbonbrief.org, daily statistics on energy consumption and power plant activities demonstrate that India’s total year–over–year emissions has, for the first time in 4 decades, fallen.

The country’s CO2 emissions fell by 15% in March, and 30% in April, in what could primarily be attributed to COVID-19 measures. However for 12 months, the rate at which Indians were demanding more power slowed drastically, and it was the March shutdowns that capped the new growth of power generation from oil, coal and gas below zero for the first 12-month period in 30 years (falling 1%).

Moreover, in March, when coal-fired power generation fell by 15% it was married with a 6.7% increase in use of renewable energy. These were also joined by a year-by-year fall in total coal deliveries, both imported and domestic—the first of such demand drops in 20 years.

This was despite the fact that more coal was mined in India this fiscal year than last year, indicating that the slowdown is not due to limited supply but a milder demand for coal as an energy source.

Production for other fossil fuel energy sources is also falling, with fiscal year 2019-20 seeing a drop in crude oil production of 5.9% and natural gas of 5.2%.

Good News Network has reported extensively already this year about such market forces pushing coal use, and in some cases oil use, to the point of complete and total unprofitability—not just in countries like Sweden, but in the U.S. India, and China.

LOOK: Scuba Diving Group Swamped With Orders for Its Face Masks Made From Recycled Ocean Plastic

Coal is becoming less and less profitable in India, and a recent energy contract auction—used by public sector planners to encourage private energy development, investment, and production—secured 2,000 megawatts per hour of solar energy at a price of $34 per hour. In contrast, oil over the same time period, when the contract was awarded, was costing $45 per hour.

According to a report from Carbon Tracker entitled “How to Waste Half a Trillion Dollars” economists warn that half a trillion in coal-plant investments around the world are at risk of becoming so unprofitable in the future as to totally impair the repayment of any investment dollars, as it is already 50% more expensive to operate an Indian coal-fired power plant than renewable sources. This number will rise to 100% by 2030.

India recently began setting records for cleaner air, and now it seems the country is leaping on the opportunity to keep it going.

This is just one of many inspiring stories and updates that are coming out of the COVID-19 news coverage this week. For more uplifting coverage on the outbreaks, click here. 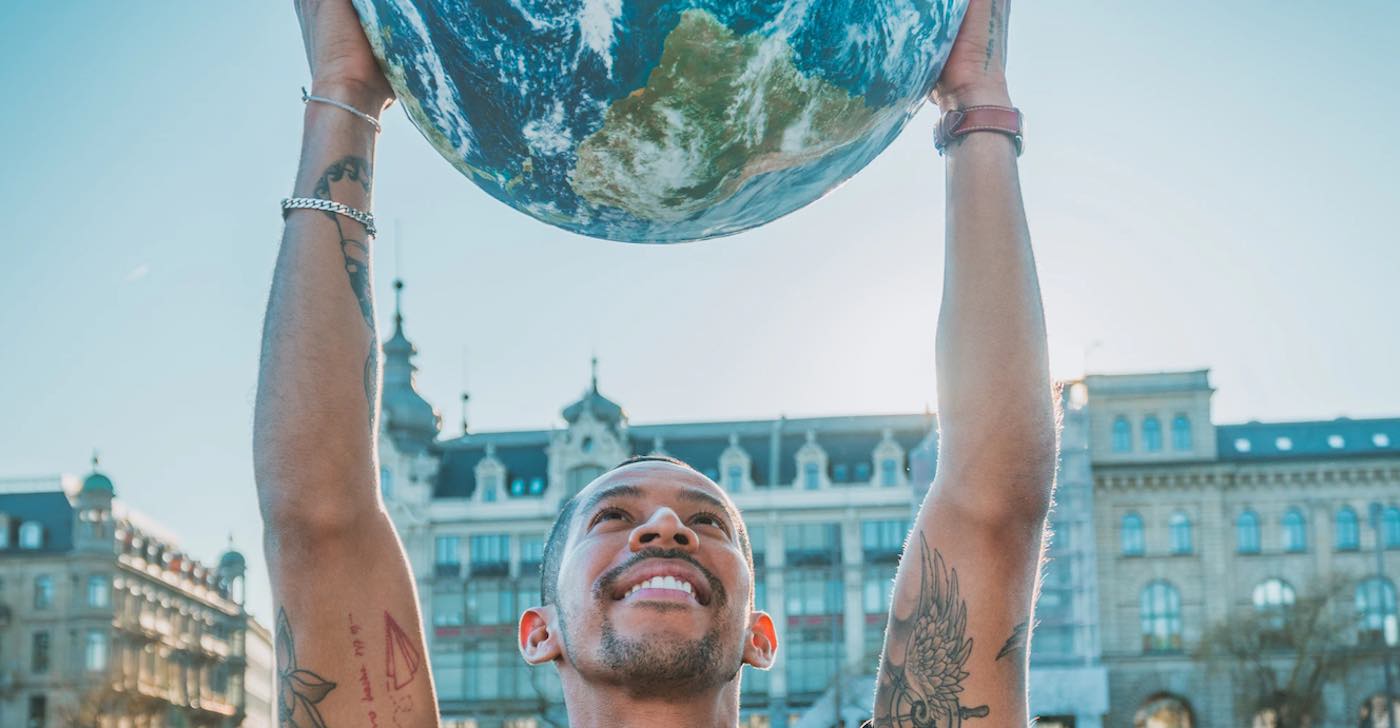 Would you agree or disagree with this statement: Climate change in the long term is as serious a crisis as the current COVID-19 pandemic? If you agreed, you answered the same as 71% of participants in a recent 29-nation survey from public opinion research firm Ipsos.

The Earth Day 2020 survey measured public opinion from many of the world’s principle producers, buyers, and populations, and almost all metrics suggest that a large majority of the world’s citizens consider climate change an important aspect of moving forward after the coronavirus pandemic.

Chinese participants registered 87% agreement with the above statement—the most of any country—while 59% of Americans and Australians agreed, tallying the smallest majority, with only 38% disagreeing.

65% of those surveyed worldwide want governments to prioritize a green economic recovery, as their lockdown measures from coronavirus are lifted. Respondents from India, China, and Mexico were emphatic about this directive, with 80% insisting on sustainable, clean measures.

RELATED: Whales Feces Represent One of the Greatest Allies Against Climate Change—Even More Than Trees

Slightly more people, 48% to 44%, said that economic recovery from the pandemic should not supersede environmental regulations, and any recovery should be environmentally responsible.

The survey didn’t include only COVID-19-related questions, but a variety of others involving what people’s habits might be in the face of climate change and whether theywould be willing to alter them. Overall, consumer or lifestyle behavior did not change from the last Ipsos survey in 2014, but in certain categories there were major fluctuations.

In Great Britain for example, 70% of those surveyed said the government would be failing them if it didn’t take action now to try and prevent the worst effects of climate change— with 59% saying they would consider not voting for a political candidate who didn’t pledge to take sufficient action to mitigate climate change.

POPULAR: For First Time Ever, Scientists Identify How Many Trees to Plant and Where to Plant Them to Stop Climate Crisis

57% of total participants surveyed would avoid buying a product with too much plastic packaging, with a whopping 80% of the hyper-techno denizens of South Korea strongly agreeing, and 71% of Chinese.

South Korea came in first in another category, with 70% of the East Asians agreeing to the idea of avoiding buying new goods by mending what you have, or buying used products instead, as a way to prevent excess waste.

Even as COVID-19 news saturates the media, occupies every headline, and is the first topic on the lips of every journalist, this survey suggests people aren’t short sighted, and a large portion of the world’s population are keen to prevent irreversible damage to the environment both with their dollar, their ballot, and their conscience. 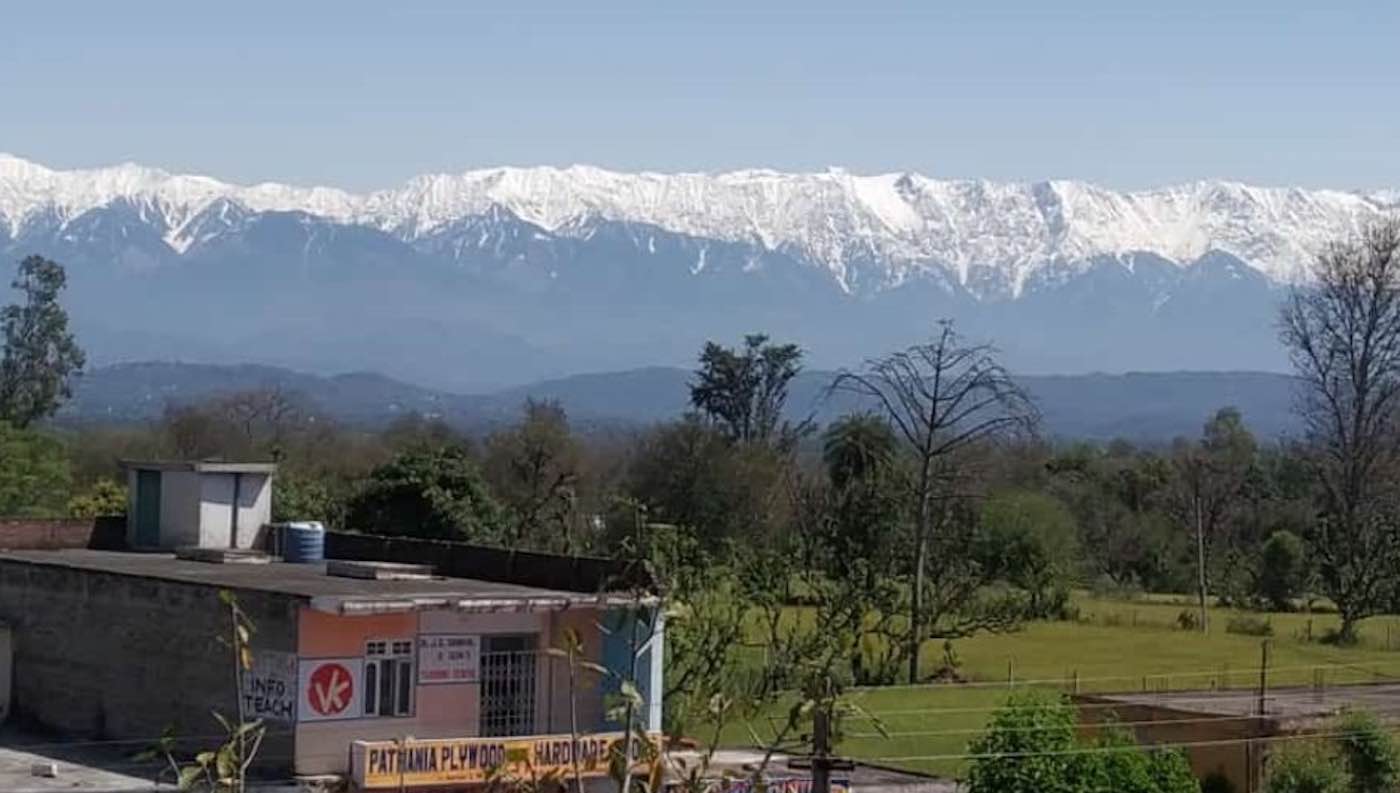 Himalaya mountains can be seen from Jalandhar since pollution has reduced in Punjab. Beautiful sight 😍#punjab #COVID19 #pollution pic.twitter.com/iZy7hwxX9R

The most notable example of this phenomenon emerged on the horizon of Jalandhar in Punjab, India earlier this week.

For the last 30 years, the tops of the Himalayan mountains have been obscured by air pollution and smog. Now as the city streets are emptied of traffic and gas-guzzling vehicles, the mountaintops were clearly visible to the millions of local communities in quarantine.

Photographers living as far as 200 kilometers (124 miles) away from the mountain range have since posted awe-inspiring pictures of the snow-capped peaks to social media in celebration of the spectacular sight.

This is not the first time that people have taken notice of cleaner air amidst the COVID-19 shutdowns; following similar reports in China and the US, air pollution is continuing to plummet in countries with social restrictions, such as the UK and India. In New Delhi alone—which has some of the worst air pollution in the world—airborne particulates plunged by 71% in just one week.

Particle pollution in major UK cities have also dropped by as much as one-third—and the rates are expected to fall even further as lockdowns continue.

“These are big changes—pollution levels are the equivalent at the moment of a holiday, say an Easter Sunday,” Professor James Lee from York University and the National Centre for Atmospheric Science told The Guardian about the data.
“And I think we will see an even starker drop off when the weather changes.” 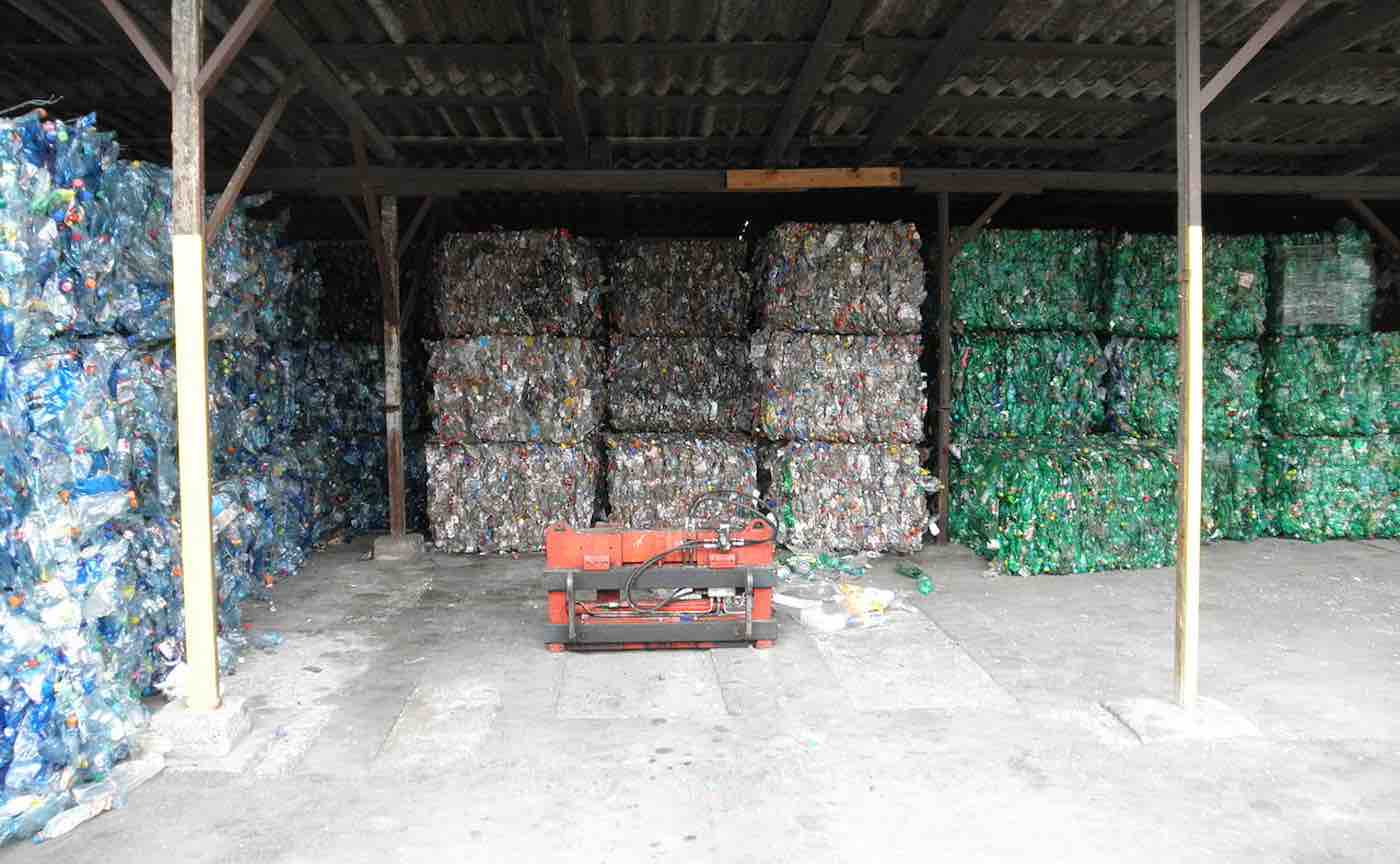 Carbon capturing and carbon sequestering, meaning the uptake and storage of CO2 molecules in a solid object, like a building or a tree which it can’t escape from, is one of the many tools for entrepreneurs, manufacturers, and businessmen, who want to do their part to combat the climate crisis.

Similarly, a startup working in Israel is eradicating one environmental toxin by placing it inside of another. UBQ Materials is taking household waste that would normally end up in landfills, and embedding it in liquefied recycled plastic to create “a thermoplastic, composite, bio-based, sustainable, climate-positive material”.

The trash is sorted, passed over a magnet to remove metals, before being dried and shredded into a kind of trash-confetti. It’s then added to plastic that’s ready for recycling and melted together before finally being dried and chopped into little pellets.

The resulting pellets can be easily shipped out and used in various manufacturing processes like injection molding and composite brick-making. Dye can be added at any point along the way to ensure the customer can have plastic of any color he desires.

The company’s founders were so confidant that the science behind their revolutionary recycling process would prove successful they commissioned Swiss environmental consulting firm Quantis to perform an analysis on just how green their operation was.

Quantis found that substituting a ton of UBQ’s pellets for the same amount of polypropylene saves the equivalent of about 15 tons of carbon dioxide emissions, making it the most sustainable thermoplastic material on earth.

The concept of taking landfill-bound trash, which would generate harmful greenhouse-methane gas, and encasing it inside recycled plastic can be traced back, according to The Post, to an Israeli military man who thought that by mixing mud from the polluted Kishon River with plastic he might help the river recover. This idea never worked, but encasing environmentally-damaging substances in plastic that would then be used to make other materials and products and thereby ensuring it doesn’t have a chance to pollute (or further complicate the climate of) our planet, was a core concept which wasn’t abandoned.

MORE: Rather Than Plastic or Bird Feathers, These Winter Coats Are Filled With Wildflowers to Help Butterfly Habitats

Generating a $50 million dollar fortune as a hummus food mogul, Rabbi Yehuda Pearl has helped the company go from a bankrupt idea to the brink of international acclaim and wealth through $3.5 million in slow savvy investing and R&D. UBQ, short for Ubiquitous. is already selling its thermoplastic composite plastic granule to Plasgad, an Israeli company that manufactures pallets, crates, and recycling bins—2,000 of which are on their way to the Central Virginia Waste Management Authority.

The UBQ facility on the Tze’elim Kibbutz can produce about one ton of their special material in an hour, resulting in between 5,000 and 7,000 tons produced annually. The company’s success is leading to a new facility that will produce 100,000 tons annually.