Mortgage rates officially hit their lowest levels in 4 months after this week’s inflation data. Despite the recent progress, Fed officials continue to talk about keeping rates high “for as long as possible.” Who’s telling the truth?

First off, we know that mortgage rates are at 4 month lows because that assertion relies on the past as opposed to the future.  You’d have to go back to September 12th to see anything lower for the average lender.  We also know that inflation has been the driving force behind the tremendous rate volatility seen over the past 12 months. 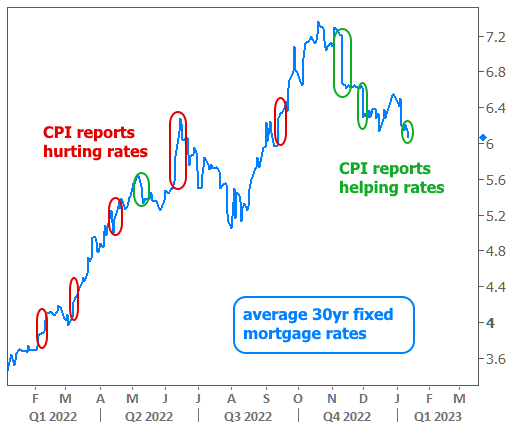 Specifically, the Consumer Price Index (CPI) has been at the scene of the crime for most of the largest rate moves.  Up until November, all but one of those large moves was toward higher rates, but things have shifted since then.

Rates respond to inflation data because rates are based on bonds and inflation directly impacts the returns on bonds.  They’re responding more than normal in the past year because inflation jumped at the fastest pace in 40 years in 2022.  Recent reports show progress on the inflation front, so longer term rates like mortgages are showing some hope for the future. 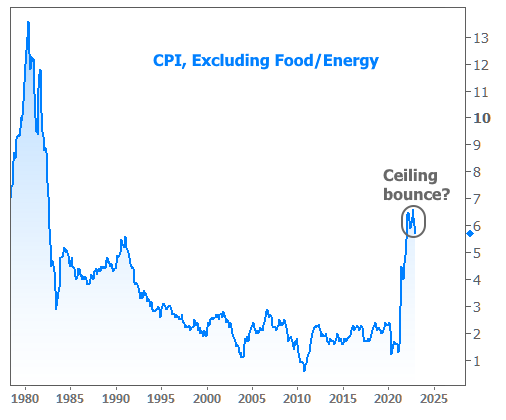 All of the above makes sense from a logical standpoint, so why do Fed officials continue saying that more rate hikes are needed and that rates will remain high as long as possible?

One source of confusion is the fact that the Fed Funds Rate (the thing the Fed hikes/cuts/etc) is different than mortgage rates.  The Fed Funds Rate applies to overnight lending between large institutions and has the biggest impact on the shortest-term bonds.  The longer a bond lasts, the more it can vary from the Fed’s rate.

The Fed sees the potential ceiling bounce in inflation and thinks “that’s great, but let’s not get complacent.  We have to get inflation back into the 2% range.”

The Fed coaxes inflation lower by keeping short term rates high.  That impedes the flow of credit across the financial market, ultimately slowing down economic demand enough that sellers are forced to lower prices.  That’s the oversimplified idea anyway.

While some might argue that the Fed has already hiked enough that inflation will surely continue to fall, the Fed is concerned about repeating a mistake from the 80s when it cut rates too soon and inflation flared back up.  They’re particularly sensitive to this risk due to a still-very-strong job market.

In other words, the Fed has to stick to a tough, inflation fighting script or risk the market becoming exuberant at the thought of potential rate cuts.  Such exuberance could undo some of the progress made against inflation recently.

Despite the Fed’s tough talk, they are beginning to acknowledge that it’s time to slow down the pace of rate hikes.  At this point, the market only sees the Fed being able to hike two more times and by a smaller amount than last time.  Once the Fed stops hiking, they’ve been unified in their goal to keep rates high for as long as possible. 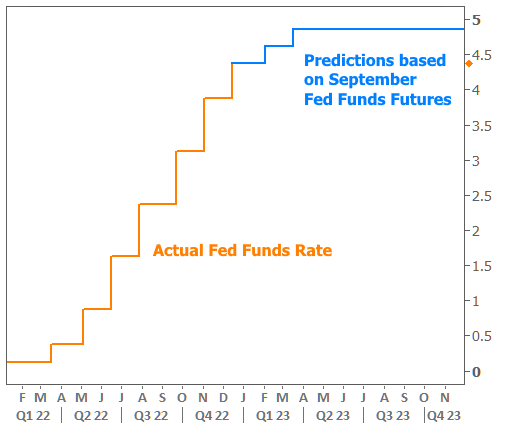 It’s impossible to know how long “as long as possible” will be.  What we do know is that the rate path will take cues from inflation and employment data.  If inflation continues to fall and unemployment moves higher, the market will increasingly bet on the Fed cutting rates.  For now though, with inflation just starting to confirm a shift and unemployment still very low, it’s not a surprise to see the rate outlook settling in a narrower, more sideways pattern. 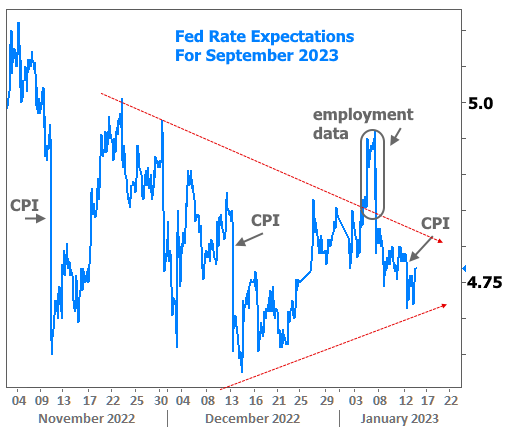 The silver lining is the fact that longer term rates often begin their descent well before the Fed when it comes to these hike/cut cycles.  The chart below shows how this played out with 10yr Treasury yields (highly correlated with mortgage rates) and the Fed Funds Rate most recently. 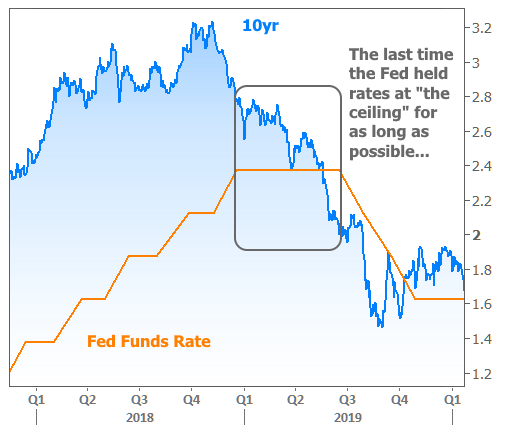 We won’t know whether the Fed will decrease the size of its next rate hike until February 1st.  Between now and then, markets will be paying careful attention to economic data, looking for any evidence of an inflation resurgence or an acceleration in wage growth.  Data available over the next 3 weeks is not quite in the same league as the data of the past 2 weeks, so markets may not move with as much conviction until hearing from the Fed.