Fed May Be Hiking in March, But Higher Rates Are Here Today

In the past 2 weeks, press coverage of the Federal Reserve’s policy outlook has ramped up significantly. The Fed is now expected to start hiking rates in March and to hike more than previously expected in 2022. If you think that gives you time to get a mortgage before rates go up, think again.

While Fed policy has an impact on the entire financial market, the only major rate they control is the Fed Funds Rate–an overnight rate that applies to the shortest term borrowing between large financial institutions.  That’s a distinctly different animal than mortgage rates.

Despite that, mortgage rates found a way to jump by more than 1% in less than 2 months in the middle of 2013 (a brutally fast move in the mortgage world).  The culprit was the taper tantrum: the market’s reaction to the Fed signaling that it was considering winding down (or “tapering”) its rate-friendly asset purchases.

The most sincere tapering threats began in May 2013.  Fed policy officially mentioned tapering on June 19.  By the first week in July, the damage was done.  It was almost 6 months later before the Fed officially announced the tapering plan, and almost another 2 years before they finally lifted rates from the zero lower bound. 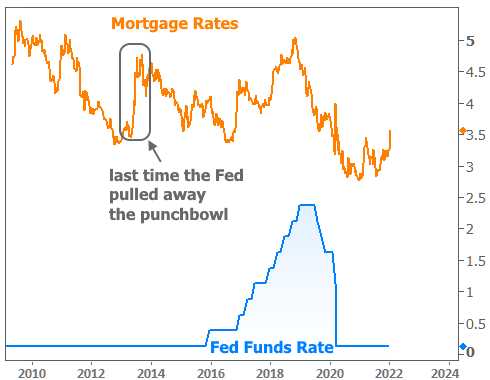 Things are different this time around, and we’re not likely to see rates spike abruptly as they did in the past.  But in relative terms, this winter is the modern day equivalent of the taper tantrum months in 2013.

This week initially brought a brief respite from the chaos.  Rates were slightly higher on Monday, but fell over the next 2 days.  Thursday was mixed, but still strong enough to hold out hope that rates had found their near-term ceiling.

Then came Friday.  It began with a sliver of hope.  Retail Sales (an important economic report) came in weaker than expected.  That’s not good for the economy, but interest rates tend to benefit from bad economic news. Nonetheless, the bond market (which dictates rates) barely budged.  One theory is that traders can look past month-to-month volatility when sales have been generally much higher than normal.  Even now, the 12 month average of Retail Sales is 1.5%, roughly double the highest pre-covid levels. 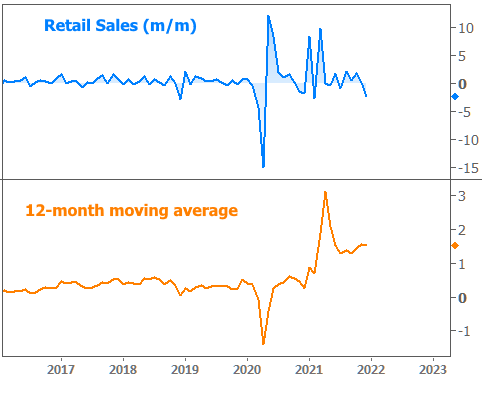 Caveats aside, there may not have been a low enough number to save rates.  Traders are interested in other data because the Fed is interested in other data–specifically: inflation.  90 minutes after the Retail Sales data, the Consumer Sentiment Survey showed the highest inflation expectations in more than a decade.  This is a metric the Fed often mentions as being important to the outlook. 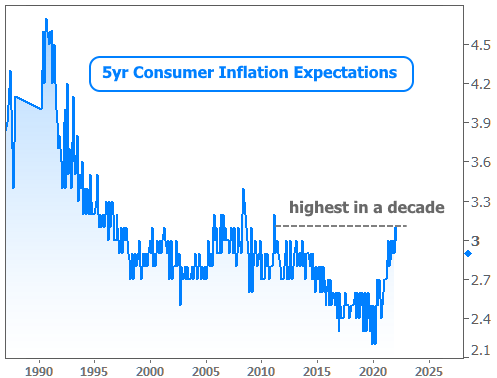 So was it the Sentiment data that tanked the bond market and sent rates screaming higher on Friday?

It probably didn’t help, but it wasn’t the culprit.  After all, 2 days prior, the Consumer Price Index–one of the two biggest inflation reports in the US–sent a similar message. 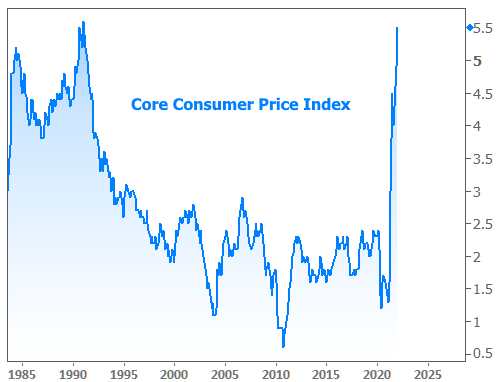 Despite the scary chart above, there very little bond market drama on Wednesday.  Moreover, the most responsive gauge of inflation fear (market-based inflation expectations derived from bond trading) is well off November’s highs.  It didn’t even increase after Friday’s Consumer Sentiment data. 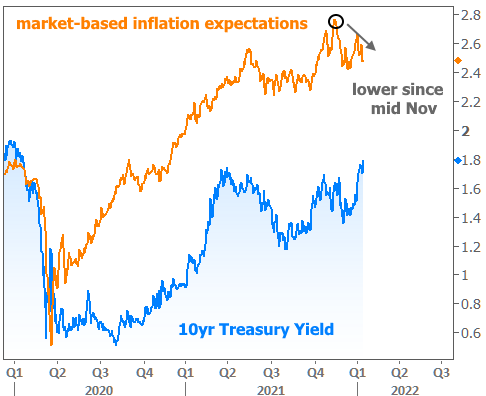 So why did rates spike on Friday?

This is actually a bit of a trick question.  Rates have been rising in general since late 2020.  The current rate spike really began last week.  The first 4 days of the week were mostly a lull in the bigger picture.  They had a chance to be the start of a bigger reversal, but ultimately revealed themselves to be a breath-catching exercise before more pain.  In other words, it was a trap–at least for anyone hoping that rates would do something better than catch their breath.

The response is varied among mortgage lenders in terms of scope and timing, but on average, 30yr fixed rates are nearly 3/8ths of a point higher in the first 2 weeks of 2022.  Even the notoriously stale but widely-cited Freddie Mac weekly rate survey mostly caught up to reality with their biggest jump since the start of the pandemic. 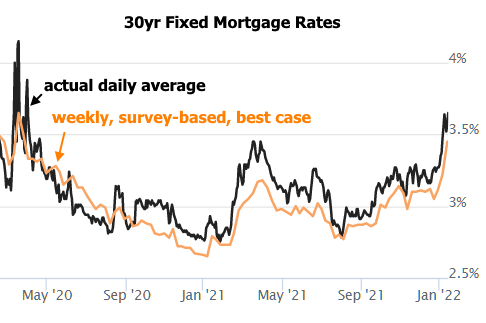 Is there any hope?  Will rates continue higher and higher?

There’s always hope.  It’s just a question of when it’s justified.  In the short term, optimists might consider that the Friday before 3-day weekends is often a day for big moves in the bond market that are subsequently moderated when traders are back in the office.  Additionally, let 2013 serve as an example that the bond market is already doing its best to get ahead of future Fed moves.  To be fair, that process may be far from over, but the point is that it has clearly been underway in various forms for quite some time.

In terms of events that will inform the outlook, after a bit of a lull next week, attention turns to the next Fed announcement on Wednesday, January 26th.  This won’t be a venue for any policy changes, but it will give the Fed a chance to update its official verbiage in light of recent market volatility, geopolitical risks, and the omicron surge.